Back to all posts
technology

How syncing your fitness tracker and smartwatch works

Syncing your smartwatch and fitness tracker's activity to the MoveSpring app, or other apps, may seem like magic. Here's how it really works.

You take your daily walk and peek at your fitness tracker a few times a day. You open the MoveSpring app and see your steps, distance and active minutes reflected in the company step challenge. Syncing usually works reliably, but there are scenarios where syncing can break. This article will cover all the moving pieces, what can go wrong, and ways to fix common issues.

Common misconceptions on how syncing works:

Data is continuously syncing from your smartwatch to your phone

Users think their fitness tracker is syncing data to their paired apps in real-time. In reality, the sensor on the tracker or smartwatch isn't sending the activity anywhere. The sensor is collecting the data locally, but only sending data to its paired app on intervals controlled by the tracker's proprietary algorithm. Data syncs to the paired app when opened on the user's iPhone or Android.

Apps like MoveSpring can pull any data, at any time from your fitness tracker

Users believe that 3rd party apps, like MoveSpring, are able to pull data directly from the fitness tracker at any time. In reality, 3rd party apps don't have access to the tracker due to privacy, security and battery reasons. We have access to an API and are notified when new activity data is available for each user. Depending on many factors, this could happen once a day or a dozen times per day.

Steps 4-6 happen quickly, in just a few seconds. Unfortunately, steps 2-3 are up to the fitness tracker and its paired app to determine how often they sync.

This is a high-level view into how syncing works. Feeling technical? Let's dive even deeper on the subject. 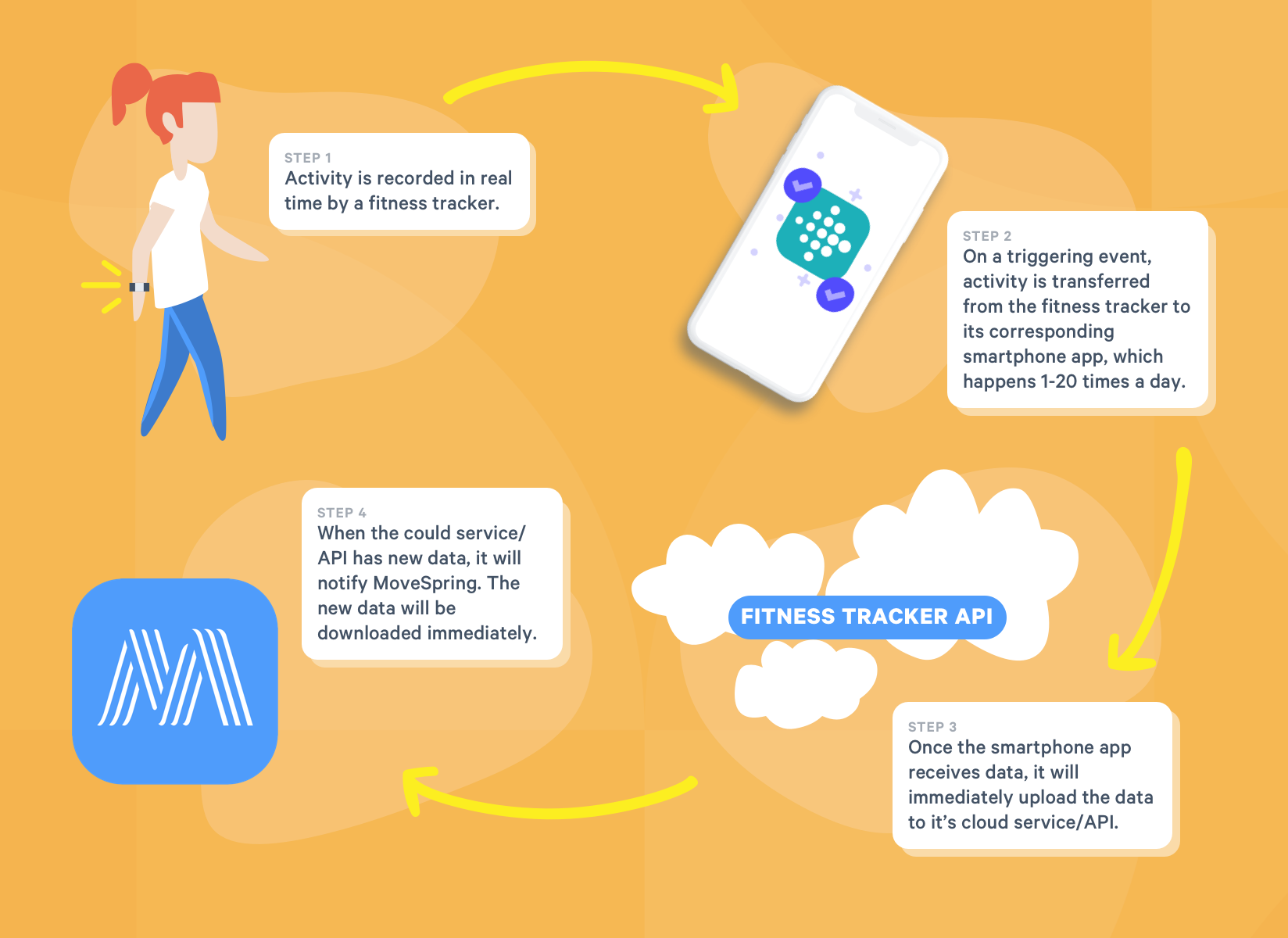 Let's use MoveSpring as the example target to illustrate how syncing works. Most 3rd party apps like Stridekick and Strava work in a similar way.

Our goal: How do we get data synced from the fitness tracker to the MoveSpring app?

To reach its final destination, activity will be synced and stored through four unique touchpoints.

The fitness tracker will collect your activity in real-time and store it locally on the smartwatch. Every step taken is tracked by the device's accelerometer, gyroscope, and other specialized sensors in real-time. However, this data does not leave the device while tracking. Fitness trackers optimize for long battery lives over frequent syncing to the mobile app. The majority of the steps registered by the tracker stay on the device until a triggering event happens.

3. The cloud/API for the fitness tracker

4. The 3rd party app or service, such as MoveSpring

For example, MoveSpring, Stridekick and Strava. There are thousands of 3rd party apps that utilize this activity data.

Syncing is reliable in most cases, but there are scenarios where syncing doesn't work. Here are the most common.

Data isn't syncing between the fitness tracker and its corresponding mobile app.

Solution: The best way to address these common issues is to open your paired mobile app. This would be your Fitbit, Garmin, Withings, Misfit app.  If you use an Apple or Google Wear OS Watch, then MoveSpring would be the paired app. Opening the app will trigger a sync to occur between the tracker and paired app. The next time you soft close the app, it should continue to run in the background. If there are no other issues, then automatic background syncing should resume. If this is a common problem, you may want to check that you don't have "low battery" on or "allow background refresh" off.

Data is syncing to the user's mobile app, but isn't being synced up to the cloud/API.

Solution: Check that you aren't on a restricted WiFi network. Verify that your stats match between the paired mobile app and web app. For example, you might find that the Fitbit app has your latest stats, but your profile on fitbit.com does not. This indicates that your data isn't syncing from your mobile app to the cloud.

Data is being synced up to the cloud/API, but MoveSpring does not show the latest activity.

Solution: Reconnect your fitness tracker inside the MoveSpring app. When you reconnect, it should create a new authorization and establish a new notification subscription. If this still doesn't work, it's possible the cloud service/API is currently having issues. You can check for issues with your device's cloud/API by checking their website's status page.

We used MoveSpring as the example 3rd party app, but syncing works similarly for 80% of other 3rd party apps. The most common difference is whether they use a data aggregator, such as Validic.

If you encounter syncing issues with your fitness tracker, simply reach out to our support team. We are always happy to help!